The Statue of Unity is the tallest statue of the world with a height of 182 meters (597 feet).

The statue is built on the Sardar Sarovar Dam and is in the Narmada district of Gujarat, India. The total area of the statue and its surrounding is around 2 hectares (4.9 acres) and the monument is surrounded by 4.6 square miles (3000 acres) of an artificial lake.

The statue was designed by Ram Vanji Sutar, a prominent Indian sculptor. Ram Vanji Sutar has been awarded Padma Bhushan and Padma Shri in 2016 and 1999 respectively for his contribution in the field of arts.

Statue of Unity, the tallest monument of the world was dedicated by the current prime minister of India Narendra Modi on 31st October 2018 on the 143rd birth anniversary of late Sardar Vallabhbhai Patel.

Let’s see all the aspects of the Statue of Unity.

Larsen & Toubro got the contract of 2989 crore rupees (420 million USD) for the design, construction of the statue in 2014. The contract includes the operation and maintenance of the statue for 15 years.

The Statue of Unity is made up of structural steel, reinforced steel, bronze plates, bronze cladding, and few other metals.
While the Spring Temple Buddha in China, the second tallest statue took 60 years to be built, the Statue of Unity was built in only 5 years. This is the largest statue built in the least time in the history.
The statue can withstand an earthquake of 6.5 on the Richter scale and wind of 220km/hr. There won’t be any corrosion for the next 1000 years as said by the designer.
Around 3000 workers and 250 engineers were employed for the construction of the statue.

Narendra Modi, then Chief Minister of Gujarat had laid the foundation stone of the statue on 31st October 2013, the 138th anniversary of Sardar Patel’s birth. The momentum started when Narendra Modi became the prime minister of India.

Do you wonder why the statue is 182 meters? This is because, in Gujarat assembly, there are 182 seats in total. 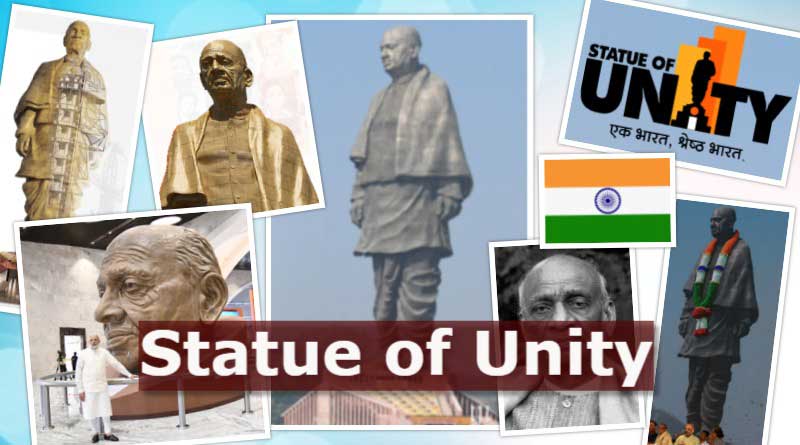 Now the question arises why Sardar Patel? Why not Mahatma Gandhi or Subhash Bose? The reason behind this is Vallabhbhai Patel had united more than 500 (562 to be exact) states ruled by kings and landlords after India got its independence in 1947.
The project includes a museum, audiovisual gallery, laser show, research center, ferry service, and camping etc.

Villagers from 22 villages who lost their land for the statue wrote a letter to Prime Minister Narendra Modi to stop the project. Around 75000 thousand people protested and the government offered cash, land compensation and jobs to those who lost their land.

If Patel were alive, he would have never approved such a project. I personally feel that this project is pure wastage of tax that could have been utilized in a better way to make India better. The money could have been used for women’s safety, building skill development centers and clean India.

This is not the first time when some political leader used a statue for their political benefits. Even if the statue does not give a good return of investment (No offense to Sardar Vallabhbhai Patel), I am sure politicians have already started showing various unrealistic benefits of this statue to prove the investment as worthy.

No doubt there is pride attached with the tallest statue of the world. There are plenty of things planned around the statue in future which will make the statue a remarkable tourist place.
In my point of view, the government has not given proper attention to the statue’s profitability. The money from the tax fund, utilized in the Statue of Unity could have been utilized in a better way.