Before knowing about the moai, let’s know about the island itself.

Easter Island is a remote volcanic island in the Pacific Ocean.

Out of hundreds of islands in the Pacific Ocean, the Ester island is well known for the presence of giant stone heads called the Moai. Easter Island is a territory of Chile and is situated in the southern Pacific Ocean.

As per history, the first inhabitants named the island as Rapa Nui. So, these days also, few places on the island are named based on Rapa Nui.

For centuries, people around the globe only knew about the stone heads but during an excavation by archeologists in May 2012, it was discovered that the statues are not only stone heads but have the body as well. There are a total of 887 Moai found on Easter Island. 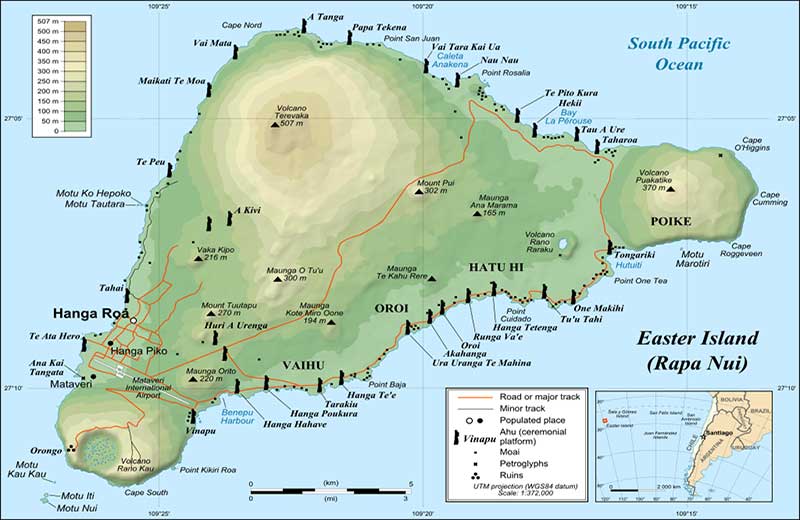 The largest statues among all called Paro is 33 feet high and weighs around 90 US ton. But scientists found one unfinished statue and if that were finished, it would have 70 feet, weighing 297 tons. The heads of the statues are oversized as compared to the body. The statues on the Easter Island is often referred as “Easter Island heads” as in few places like Rano Raraku, the statues are buried and the head part is visible to outside. Rano Rakaru is the hillside slope where most of the Moai are half buried, 394 to be precise.

Most of the statues are carved from the volcanic ash called tuff. Since the island is volcanic, sufficient amount of tuff is available.

The overlarge heads have an elongated nose, long flat ear and fish hook shaped nostrils make the statue little different. The average height of the Moai is around 4 meters (13 feet).

All the statues are faced outland while a group of 7 statues faces towards the island backing the ocean in Ahu Akivi, a sacred place in the Rapa Nui island. It is believed those statues are the leaders and protectors of the island.

There is a unique statue in kneeling position named as Tukuturi. Tukuturi is made up of a unique stone called Puna Pua. Tukuturi is the only statue where the legs are clearly visible as compared to others.

The stone platforms where one or more moai are placed are called Ahu. There can be many Ahu found on Easter Island. The largest among all the Ahu is the Ahu Tongariki which houses 15 moai. As the Ahu holds the leaders, all the Ahu are present near the shore.

After carving the moai, the surface was polished smooth by rubbing pumice. As the volcanic stone tuff is not so strong, the outside part of almost all moai is eroded with time.

In present days, one moai is present in the British Museum, London named Hoa Hakananai’a. As per the museum, the statue was transferred from Rapa Nui on 7th November 1868 and arrived at Portsmouth on 25th August 1869 as a gift for Queen Victoria. The statue is 2.42 meters high and weighs approximately 4 tons. The Hoa Hakananai’a is made from a stronger stone Basalt which is one of the sixteenth moai found in the Easter Island. It has been reported that the people of Rapa Nui has sought help from Chile government to get the Hoa Hakananai’a back from British Museum to Easter Island,

Who built the Moai?

In the 18th century, when few Europeans lead by Dutch navigator Jacob Roggeveen arrived at the Rapa Nui island, there was a small population around 2000-3000 people as mentioned by Europeans. Since then, the name “Easter Island” was coined. So, it is believed the ancient civilization in Rapa Nui built those giant statues sometime between the 13th and 15th century.

Keeping such huge stone heads in mind, people generally question the technology the ancients used which often leads people to believe that the statues have been created and moved by the aliens.

Now, if you are wondering – if the ancient civilization on Easter Island built the moai, then where did the makers of Moai go? why everyone got vanished?

As there is no concrete proof, researchers speculate that the Europeans have enslaved them and moved to Europe. Some say due to the cutting of trees to move the moai, the people almost cut down all the trees which made the environment worse and the civilization could not survive.

Read also: Statue of Unity facts: Everything about the World’s Tallest Statue

How the Moai were built and moved?

As the volcanic ash called tuff is not so hard, it was easier for the carver to carve the body and head parts. If there is any harder rock encountered inside the tuff, the carvers abandon the statue. So, there are many unfinished moai found on the island.

The process of moving such huge statues are not known exactly. Many researchers have provided many theories on how the moai are moved and here are few of them.

The most prominent way explained is the statue to be tied with rope from both sides and from the back. The statues were made to walk by tilting them from side to side and pulling forward at the same time. The rope behind the statue is to make sure the balance is maintained.

Why the moai were built?

They built large stone slabs called Ahu. All the Ahu are considered sacred and the moai over them represents chiefs and powerful leaders. The moai are often considered as the protector of the island and its people.

Are you now wondering “why the giant stone-heads are named as moai?”, “does the name mean something?”, the fact is that nobody knows.

The Polynesian island today has become a holiday destination despite being one of the isolated islands in the world. Current days, the population is around 3000 to 5000 on Easter Island. Hanga Roa is the place where most of the Polynesian lives. Tourism has spiked up since the last decade and many hotels are established for foreigners. These days, the island is linked with Chile, Peru, and Tahiti with air route.

Hope you got all the details. Cheers.