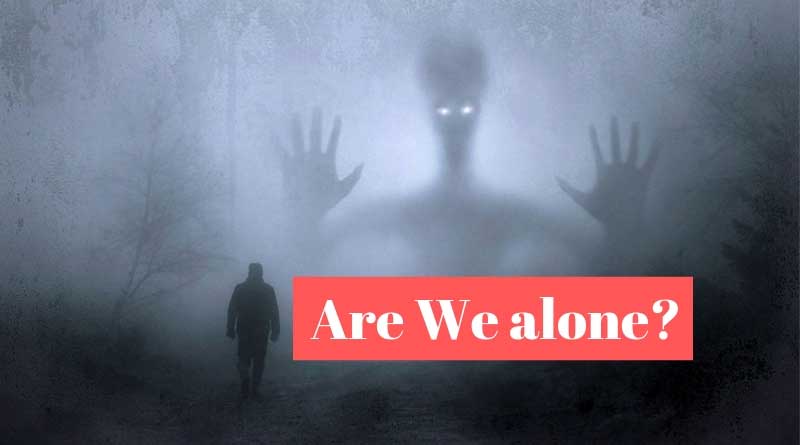 When you look at the stars in the sky, have you ever wondered if there is life beyond earth? Do aliens exist? Here, we are not talking about only green headed aliens that we see in movies; rather any form of life like microbes, bacteria etc. The question “do aliens exist?” might look simple but the answer to this needs a lot of scientific research; even with today’s technology, it is not enough to provide a concrete answer.

Enrico Fermi, an American-Italian physicist, the creator of the first nuclear reactor, in 1950 looking at the sky asked: “where is everybody?” During that time science was not evolved and nobody even understood the context of alien life.

With the rapid evolution of science, modern scientists have discovered 88 constellations which give a home to more than 100 billion galaxies. The Hubble Telescope is the most powerful instrument to get these figures. With technological advancements, the number of galaxies discovered is expected to reach 200 billion in the next few years. In our galaxy Milky Way, there are around 100 billion planets that scientists have detected.
Have you lost count of the number of planets that can be present in the 88 constellations? Take a couple of seconds and think if extraterrestrial life exists out of billions of planets out there?

The Australian scientists have received a number of mysterious Fast Radio Bursts signals from deep space. Fast Radio Bursts (FRBs) are a blast of highly intense radio lights which lasts for few milliseconds in space and contains energy equivalent to the energy of the sun released over 80 to 100 years. These FRBs often comes from a mysterious source which can be from intelligent aliens who can harness this kind of energy. Drake equation is being used to find out possible extraterrestrial life in our galaxy, Milky Way using the FRBs received from various unknown sources.

In recent news, NASA’s Curiosity Rover has collected a few interesting findings which can boost the search of alien species on Mars, the Red Planet.
An ancient streambed was found on the surface of Mars which suggest some parts of Mars had water flowing for thousands of years. The Curiosity Rover drilled 2.5 inches (known as John Klein rock) and found various chemicals ingredients Sulfur, Hydrogen, Nitrogen, Oxygen, Carbon, Phosphorus which suggest Microbial life present around billion years ago.
In early 2018, Curiosity captured images similar to trace fossils using its Mars Hand Lens Imager (MAHLI) on the red planet.

Kepler Space Telescope, an observatory in space is established by NASA to search for alien life in other planets outside of our solar system. It has discovered 4034 exoplanets and out of which multiple planets are near earth sized containing water and rock. The greatest discovery of alien planets includes Kepler-10b, Kepler-16b, Kepler-20e, Kepler-22b, Kepler-37b, Kepler-62e, Kepler-62f, Kepler-69c, Kepler 452b and Kepler-186f which are being studied more for the existence of extra-terrestrial alien life.

Similar to Curiosity Rover by NASA, the ExoMars joint mission between European Space Agency and Russia delivered observatory instruments into Mars orbit to analyze the chemical composition of Red planet’s environment and find out if there was ever life on Mars.

Scientists are using Coronagraph in space-telescopes to block out the light from stars to have clear visibility of nearby stars.

Let’s assume alien life exists somewhere in Titan, Knowhere, Vormir, Zen-Whoberi or Nidavelir (names taken from Avengers movie). Then, how we can figure out if aliens are technologically advanced than us or not?

To find out a civilization’s level based on technology, a Soviet astrophysicist Nikolai Kardashev in 1964 proposed a method called Kardshev scale. The Kardashev scale is hypothetical and can help us in understanding where we are based on the amount of energy, a civilization can harness and utilize.

Type I: The civilization that can harness 100% of energy reaching to the planet from its parent star.
Type II: This type of civilization can utilize 100% of the energy of its parent star. In 2015, scientists captured unusual light curve for star KIC 8462852 which made the scientists to speculate the existence of Dyson Sphere. A Dyson Sphere is an alien megastructure of Type II.
Type III: The civilization will be able to control the energy of the whole galaxy. This civilizations are very rare and may not even exist.
Humans are not yet close to Type I and it may take another hundred of years to reach Type I, thousands of years for reaching Type II and millions of years for reaching Type III.

Do aliens exist in the universe?

Stars like the sun survive around 10 billion years. Our solar system is not mature enough and is around 4.5 billion years old. The humans have technologically evolved since a century. So, if there is alien exists on any planet; we can consider ourselves to be far behind with the technology we have right now.

There are many SETI (The Search for Extraterrestrial Intelligence) organizations around the globe including government and private organizations, trying to capture non-random Fast Radio Bursts, electromagnetic radiations, television signals in order to find possible alien civilization. Few well-known organizations like NASA and persons like Frank Drake (inventor of Drake Equation), Stephen Hawking (Physicists, Cosmologist), Elon Musk (founder and lead designer of SpaceX) are doing enormous research and pouring billions of dollars to search for alien life.
It has been always controversial that in Area 51, the USA government is doing top-secret alien operations.

Till now, scientists have not found any trace of life on any planet. Earth is the only planet with life. For life to exist on any planet water, oxygen and food are required; no other planet has these three things that we know of.

There are many stories of people who claim to have intercepted aliens and alien spaceships/UFOs which can be found on the internet. But there is no concrete evidence as expected.
I will write about these stories in some separate article.

The most surprising story among all others is when the immigration department staffs of Haneda Airport, Japan in 1954 saw a traveler holding a passport from a country named Taured, which in reality does not exist in the earth. The whole department was astonished and clueless. Police took the mystery man and all his belongings into custody and house arrested him in a hotel. The next day, they found the man vanished and all his belongings were gone from the police station. There are few scientists and analysts relate this story with the parallel universe where scientists believe people like us exist similar to our earth but in another dimension. This still remains a mystery.

Personally, I think there are many top secret projects are being run by government organizations to explore alien life. It seems the critical discoveries about the existence of aliens are being covered up by governments.
Though we have made spectacular progress in scientific research, science has not been able to provide an answer to “do aliens exist?”. We have many more years to come when science will be capable enough to find intraterrestrial species, so-called Aliens.

Sun Facts: Everything you need to know about the Sun

Why is the ocean blue? All you need to know.