When we talk about the Bermuda Triangle, many people have many thoughts and not sure if the Bermuda Triangle mystery solved or not. It is one of the most mysterious areas in the world.
The term Bermuda Triangle also known as Devil’s Triangle was named by Vincent H. Gaddis, an American author in 1964 in Argosy Magazine.
It lies in the North Atlantic Ocean between Florida, Puerto Rico and the island of Bermuda covering around 500,000 square miles. If a line is drawn between these points in the map, the area becomes a triangle shape. 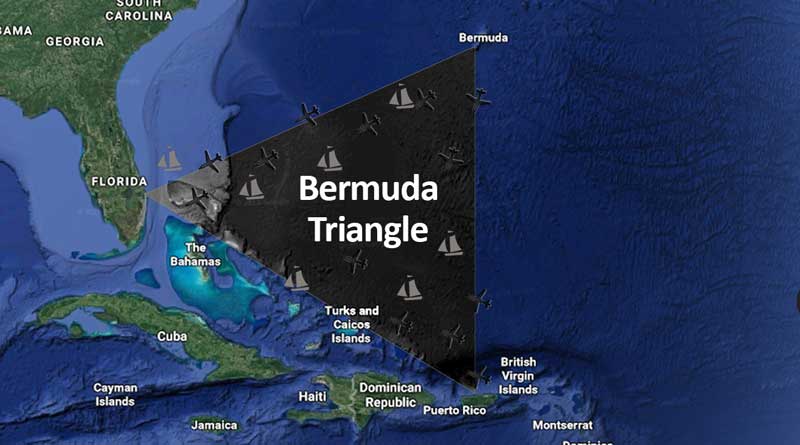 With time, there are many theories given by scientists, travelers around the globe. Some say, it is cursed and paranormal and some people even believe it is something related to Aliens.

The history behind the Bermuda Triangle:

Christopher Columbus, an explorer has discovered Bermuda Triangle in 1492 during his journey to discover America.
The crew along with Columbus noticed mysterious activities during their journey such as compass malfunction, bright lights around the clouds in the sky and even meteor fireballs falling from the sky.

On March 4, 1918, USA Navy’s largest fuel ship at that time U.S.S. Cyclops got disappeared near Barbados and all 309 people in it went missing in thin air. There was no distress signal sent from the ship nor anybody answered radio calls from other nearby ships while they had all those technologies.

Dec ember 28, 1948 – an airplane carrying 26 people got disappeared, 50 miles from Florida.
A ship called Southen Districts, a US Navy landing ship also reported missing near Bermuda Triangle in October 1951.
In another strange report on December 22, 1967, a cruiser named Witch Craft which was built to be virtually unsinkable disappeared along with its 2 passengers in the Devil’s Triangle.

The Bermuda Triangle came into limelight when the story of Flight 19 was published in USA newspaper.
5 Torpedo bombers departed from Florida on their routine training mission carrying 14 men led by Lieutenant Charles Taylor on December 5, 1945, were vanished suddenly after sending their last message which was something like “We do not know where we are. Everything seems wrong. Everything seems strange”. Rescue flight which was sent also got missing and never came back.

The strangest story among all the above is The Mary Celeste. On 7th November 1872, it started sailing from New York to Geneva. In around one month on 5th December 1872, the ship was found untouched in the Atlantic Ocean but all the people were missing with everything intact. This was the most mysterious event happened around the Bermuda Triangle but there is no concrete news on this.

Many people tell this as an alternate dimension on earth or maybe the area is consumed with supernatural powers. Some people think its a gateway to another universe or maybe a black hole while few scientists mention this as a magnetic phenomenon.
On the internet, you can find many books, movies, and documentaries on the Bermuda Triangle with fascinating stories.
Bermuda Triangle, a place where true north and magnetic north wind up which causes a malfunction in compass reading. This is way beyond our understanding for most of us.

The science behind the Bermuda Triangle:

For decades, scientists are trying to give realistic theories on this mysterious vanishing of ships and airplanes. In recent studies from NASA satellite image, Meteorologist Randy Cerveny and Dr. Steve Miller put a conclusion that there are powerful wind and hexagonal clouds which can cause a terrific atmospheric phenomenon such as Air Bomb and these powerful Air Bombs can easily flip or sink any ship or aircraft.

Still, the scientists are analyzing to draw a concrete conclusion on Bermuda Triangle mystery from centuries.
Lastly, even with all the latest technologies and inventions, the Bermuda Triangle is a mystery which science is not able to unveil.

Who is The Man from Taured? An alien from another universe?